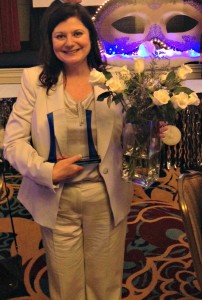 We’re proud of the many amazing team members at HHHunt who strive to improve the world around them and create places of great distinction. They fulfill our vision of improving the world and how people live. Jeri Copeland, a sales executive with HHHunt Homes, is one such shining example. She has worked in the new home industry for more than 20 years and has been an HHHunt team member for 11 years. Currently, she’s handling sales in one of our newest Richmond communities, Holloway at Wyndham Forest. Jeri has been a leading force behind Holloway’s impressive sales. It’s really no surprise given her background and approach to working with home buyers.

She began in HHHunt’s Twin Hickory community and has provided service to home buyers in a number of HHHunt communities around the Richmond region. She chose HHHunt because the company felt like family to her.

During her career, Jeri has amassed a number of accolades. At the recent Home Building Association of Richmond’s Major Achievements in Marketing Excellence (MAME) Awards, she received the Summit Award for most new homes sold in 2014 and the Hall of Fame Award for her incredible career. Customer service has always set Jeri apart. She always tries to put herself in the position of her home buyers and understands that building a new home is a very emotional process. She stays connected to her customers and serves as a counselor to them. Simply put, Jeri says she likes to listen and solve problems. She has mentored countless sales agents and her most important piece of advice is to treat people right. If you do that, success will follow.

Jeri believes that serving as an HHHunt team member is a badge of honor and she loves to work with the best of the best. She is empowered by HHHunt’s vision, mission, promises and values and notes that it ultimately comes down to caring about people. That’s something she does very well! Because at HHHunt, it’s how you live that matters.

HHHunt thanks Jeri for her dedication and commitment to excellence. Do you know someone who we should highlight? Send a note to jcrews@hhhunt.com with details about the team member!