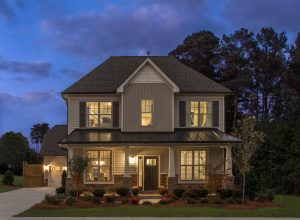 Pat McCarthy, General Manager of HHHunt Homes in Richmond, discussed the state of the new home market in Chesterfield County, Virginia with the Chesterfield Observer.  Please find the news article below:

Chesterfield’s homebuilding market continued to look strong in April, with both the number of building permits and the dollar value of new construction holding near their highest levels since the housing slump.

A total of 100 permits for construction of single-family homes were issued in the county last month, according to data from the Department of Building Inspection. While that was slightly lower than March’s robust total of 103, it was up nine from a year earlier and represented the third-highest total for any month since 2008.

Likewise, while the total estimated cost of those 103 projects edged down by about 3 percent to $20.5 million from the March total of $21.1 million, it was an increase of about $1.9 million, or about 10.5 percent, from the $18.5 million registered in April 2014. It also represented the second-highest total since 2008.

Industry observers said the housing market across the Richmond region is showing signs of strength as consumers locally and nationally appear to be growing more confident.

“We saw consumer spending increase in March for the first time since November,” noted Jeffrey S. Detwiler, president and chief operating officer of Long & Foster in a recent report. “With rising consumer spending comes higher consumer confidence, and that bodes well for the housing market.”

Pat McCarthy, Richmond area general manager for HHHunt Homes, shared the optimistic outlook. “We’re up considerably from last year,” he said. “I think 2015 is going to be a very good year.”

Helping propel the market, McCarthy said, are low interest rates and falling unemployment rates. “People are feeling better about the economy,” he said.

In addition, McCarthy said rents are increasing, and many renters are finding that they can obtain mortgages with monthly payments that compare very favorably with their rent payments.

HHHunt’s busiest neighborhoods this year have been Magnolia Green in Midlothian and the Wellspring development that just opened for construction last year off Harrowgate Road near Chester. “We really like that area,” McCarthy said. “Folks in that area seem to want to stay in that area, and there’s not a lot of new [home] supply over there.”

In addition to detached houses, HHHunt is seeing success with townhouse sales in Magnolia Green. “They seem to be doing very well,” McCarthy said, by attracting a “wide mixture of folks” from first time buyers to older residents who are downsizing, many of them lured by the idea of buying in a high-end neighborhood at a price in the low $200,000s.

So far this year, overall activity in Chesterfield has been heavily concentrated, as usual, in the large and popular subdivisions at the county’s west end. Hallsley topped the list, with 50 permits issued between Jan. 1 and April 30 and a total estimated construction value of $14.2 million. Magnolia Green followed with 45 permits and $6.9 million in estimated construction costs.

Altogether, 17 subdivisions recorded at least $1 million in permits in the first four months of the year, for a total of $51.4 million, or 75 percent of the countywide total.