HHHunt is excited to announce that construction has begun on our newest senior living community, Spring Arbor of Frederick. Located in Frederick, Maryland, this community will have the capacity to serve 109 residents and will feature both assisted living and memory care services. The community officially broke ground last week! 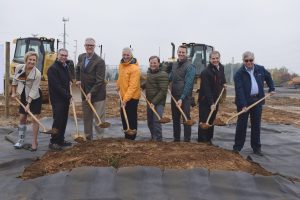 We believe it’s how you live that matters, which is why Spring Arbor of Frederick will include a number of enhanced amenities, such as life-skills programming, activity and wellness programs, fully accessible courtyards with covered seating areas, walking paths and gardening opportunities.

“Our team at Spring Arbor of Frederick will provide person-centered care through exceptional service to our residents and their loved ones,” noted Rich Williams, Senior Vice President for Senior Living at HHHunt.

Construction for this new community was made possible through financing from a $50 million guidance facility from SunTrust Bank.

“We have enjoyed supporting HHHunt on this project as they move forward with the new Spring Arbor community,” said Evelyn Lee, Senior Vice President of SunTrust’s Aging Services practice. “Their attention to detail shows that HHHunt is passionate about the residents they serve.”

“We are pleased with the partnership between HHHunt and SunTrust,” added Brian Myers, HHHunt Assistant Vice President of Finance and Accounting. “This will be our first assisted living and memory care project financed with the SunTrust guidance facility. Working with partners like SunTrust, we are excited for Spring Arbor’s continued expansion.”

This exciting new community was recently covered in Seniors Housing Business. Stayed tuned for updates on our Facebook page!