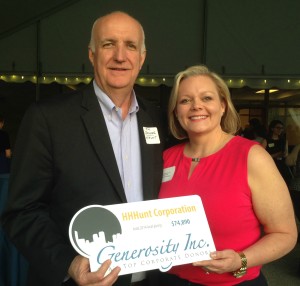 HHHunt was honored to be recognized by Richmond BizSense, an online news publication, as one of the most generous companies in Central Virginia. The outlet’s Generosity, Inc. list includes over 50 businesses that serve as strong corporate donors. HHHunt was ranked #14. This award is a testament to our entire team and the spirit of giving that is evident throughout our company. In the past year, HHHunt was honored by several publications and groups as one of the Best Places to Work, Fastest Growing Companies, and Healthiest and Most Wellness Focused Companies. These accolades are especially meaningful for us because they reinforce our vision to improve the world and how people live.

According to Dan Schmitt, HHHunt President and COO, “Anybody can talk the talk, but putting goals into real plans and executing them requires a far deeper level of commitment from our team. Our HHHunt team is united in this commitment and it’s on display every single day.” Serving as an engaged community partner is the foundation of HHHunt’s “How You Live” philosophy. We understand it’s how you live that matters most, and that’s why we are focused on being employee centered, customer focused and an engaged community partner.

In an effort to further live the philosophy we espouse, HHHunt has created a new Corporate Citizenship Committee. This will allow us as a company to embark on an even more intentional effort to make an impact in the communities in which we work, live, and serve. Not only is this the right thing to do, it will be great for our company and our team members continue to live our vision, mission, promises and values every day. HHHunt plans to be more engaged than ever and to be an inspiration to others in our corporate giving and citizenship efforts.

Finally, we want to thank all of our HHHunt team members, residents, and partners for your continued commitment and support. We can’t do it alone and are so much stronger as a team!